All the raw materials used to produce concrete are variable. The Readymix supplier must absorb these variances in his production process and produce concrete that will meet with the specification. This is inherently the risk that the Readymix Supplier will carry.

The first party that needs to know whether the Readymix supplier is producing concrete within the strength requirement, is the Supplier himself. To that end he will take samples normally at the plant from the back of the truck to have tested as process control samples. It is up to the client to take samples for cube making and testing for acceptance control for quality assurance purposes.

These two types of testing are very similar, yet there are fundamental differences between the two as well. The main difference in testing is the sampling that is done from the back of the truck at the plant for process control testing, whereas on site sampling is done from a moving stream after the first 15% and before the last 15% of concrete has been offloaded for acceptance control for quality assurance testing (SANS 5878 par 12.2).

The criteria for assessing these results are then also different. Normally process control cubes are not (but may be in certain circumstances) accepted as acceptance control testing for quality assurance.

The following things can go wrong with the testing (of perfectly good concrete):

In number 1 above, this would give a false sense of security and not even knowingly substandard concrete may be produced that could result in a failure and huge claim.

In number 2 above that Readymix supplier will increase cement contents, because he is scared of a claim. The customer will be very happy with this concrete that will give higher strengths and even earlier strengths, but this is at the Readymix suppliers expense.

In number 3 above, it is great for everyone, until something goes wrong and cores are requested, that could then result in huge failures.

In number 4 above, the specification rules that the engineer may call for the process control test results and will then call for cores to be drilled, if the situation could not be resolved. Ultimately the concrete will be accepted, but with mistrust and unhappiness due to delays and penalties and the additional cost of the drilling and testing of cores. The Readymix supplier will probably increase cement contents to prevent possible failures.

Due to our involvement in disputes and court cases, Go Consult have been asked on a number of occasions to investigate the state of testing at some laboratory. Eight of the eleven laboratories visited in a sample run were doing testing commercially at the time. Not one of the laboratories included in this article was accredited by SANAS (South African National Accreditation Systems, www.sanas.co.za) for concrete testing. SANAS accreditation would imply that they have a management system whereby they will ensure proper documentation of everything that they do and that they have systems in place to ensure a repeatable test that will reproduce a similar test result every time.

At every laboratory there were signs of incorrect crushing of cubes with tensile cracks and the cubes only being crushed on one side, with the other side failing in tension. This error will definitely give a lower result and create the impression that the concrete is of substandard quality.

This of course would raise the following logical questions (as the advocate would of course ask in a court): how many of the cubes were tested like that? Which ones were they and what would the effect of that be? This should result in a rejection of all test results, as we know that some results are lower, but we do not know which and we do not know by how much, so we cannot use any of that set of results.

We thus might have to drill cores to determine the strength of the concrete. These are often incorrectly done and interpreted, which has lead to many instructions to break out perfectly fine concrete.

So what can we do as Readymix suppliers and even Contractors?

Visit the laboratory that is testing for you and check the following items to start off with. The fact that you are checking will make them alert and because you are now informed, you can then be sure (or at least hope) that they will jack up their systems etc etc.

Items to be checked:

Should a dispute arise, Go Consult can assist to settle this and put it in perspective. Go Consult is also available to do an audit at the laboratory to ensure proper test results. 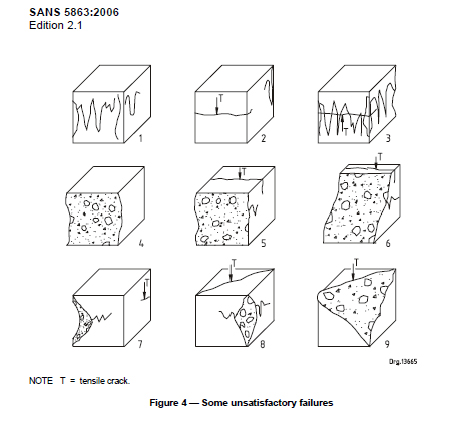 Unsatisfactory failures in cubes as per SANS 5863:2006

Cubes not submerged in water 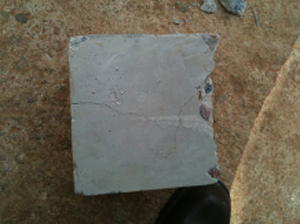 Cube placed eccentrically in the press, crushing one side and leaving a tensile crack on the other. (Fixed patens could also cause like failures). 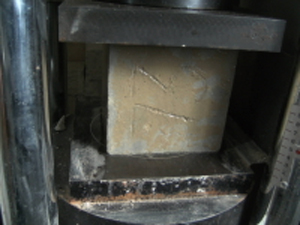 Cube placed eccentrically in the press (note the circles)

Cubes not cured in water 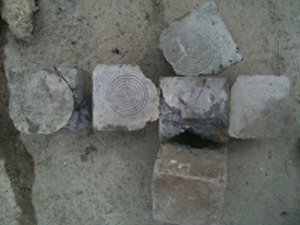 Incorrect failures found at one laboratory